Gallery 1957 are pleased to announce a solo exhibition with Ghanaian artist Kwesi Botchway at their London gallery, opening 28 October 2020. Taking its title from an essay by the cultural theorist Stuart Hall, the exhibition considers the mercurial nature of identity, particularly as it relates to colour- consciousness, representation, and perceptions of beauty. Co-curated by writer Ekow Eshun, the show presents new larger-scale figurative works, including personal portraits of the artist’s friends and peers, as well as imagery sourced from social media.

Through his work, Botchway contributes to an evolving genre of portraiture painting seeking to document contemporary Black – and distinctly African – identity, where local meets global, indigenous meets diaspora and traditional meets contemporary. Considering the impossibility of representing a singular Black experience, Botchway takes a deliberately non-naturalistic approach to portraiture. His subjects are rendered in purple. Their eyes are orange. The result is an intense, hyper-stylised depiction of the Black figure that seems concerned with articulating sensibility more than authenticity. ‘I don’t want to just produce realistic work but works that speak loud and can prompt dialogue,’ says the artist. ‘My focus is to be more conceptual, focusing on the language of colour. I want to elevate Blackness and also what Black truly represents.’ 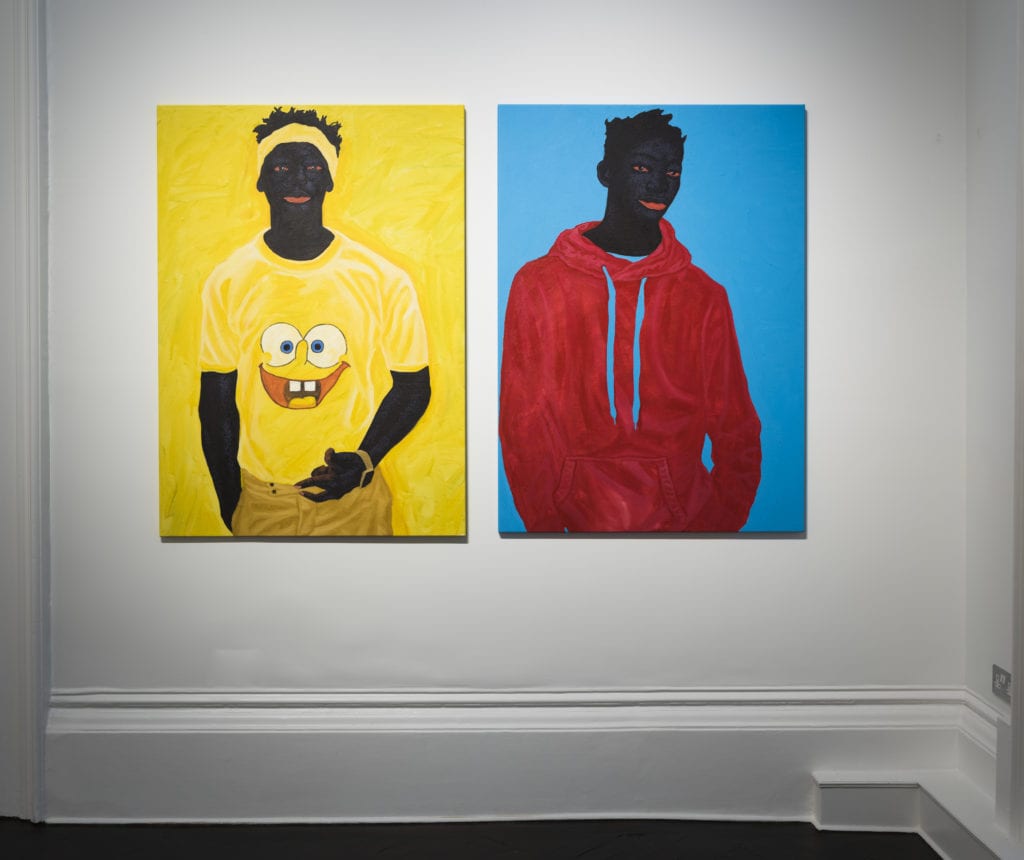 Created whilst in-residence at the gallery’s Accra space, many under lockdown restrictions during the COVID-19 pandemic, the works reflect on an unprecedented moment of both sensitivity and survival; at times a space for creation, though often fiercely punctuated by stressors of global racial and political unrest. In the work blacklivesmatter (divine protestings), Botchway depicts protesters carrying a banner and placards; set against a block background of bright yellow, the individuals appear triumphant, not defeated. In Blue Stool Gaze, Botchway presents a female perched in an almost Classical pose – her eyes gazing into the distant whilst the ruffles of a pink net dress hang around her shoulders – playing with tropes of the European arts canon. Through this process of refiguring, Botchway re-imagines existing narratives beyond the works, be they art historical or body political.

“Kwesi Botchway is an artist of compelling vision whose paintings speak of the richness and complexity of black lives. These are bold, conceptual works that suggest black identity as fluid not fixed and multiple not singular. They are portraits that capture blackness, in the words of Stuart Hall, as a state of ‘becoming as well as being’.”

The exhibition is on view by appointment only in consideration of COVID guidelines. To secure your visit, email info@gallery1957.com. 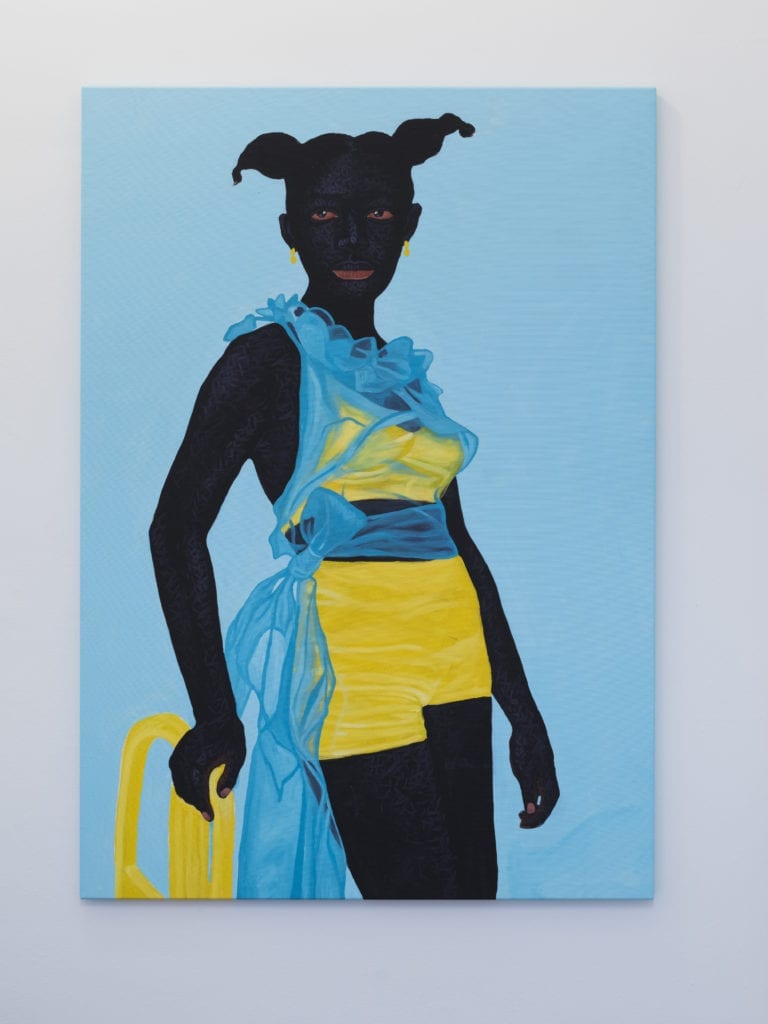 Botchway studied Art at the Ghanatta College of Art and Design, before enrolling at the Academy of Visual Arts, Frankfurt. He held his first international solo exhibition Dark Purple is Everything Black at Gallery 1957, Ghana in early 2020. His works form part of important private collections internationally. Kwesi Botchway is also the Founder of WorldFaze, Accra, an artist studio and residency space focussing on supporting young artists locally.

Ekow Eshun is a writer and curator. He is Chairman of the Fourth Plinth Commissioning Group, overseeing the most prestigious public art programme in the UK, and the former Director of the ICA, London. He is the author of Africa State of Mind: Contemporary Photography Reimagines a Continent (Thames & Hudson) and Black Gold of the Sun (Penguin), which was nominated for the Orwell prize.

He has contributed to several books including Between Worlds (National Portrait Gallery); Seen: Black Style UK (Booth Clibborn) and, forthcoming, Fashioning Masculinities (V&A), as well as to catalogues on the work of Chris Ofili, Kehinde Wiley, John Akomfrah and Duro Olowu among others. Eshun’s writing has appeared in publications including the New York Times, Financial Times, Esquire, GQ Style, The Guardian, Aperture and L’uomo Vogue.

He is the recipient of an honorary doctorate from London Metropolitan University. 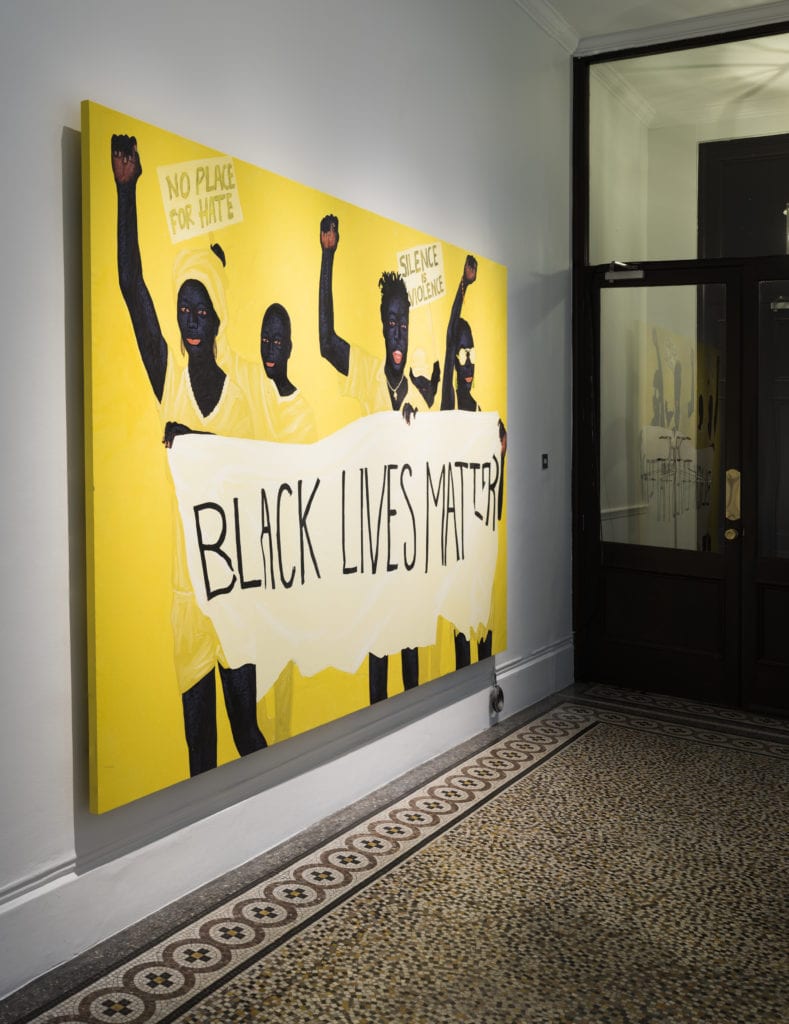 Gallery 1957’s London space opened in October 2020 and provides a further platform through which to exhibit Gallery 1957 artists working across Africa and the diaspora. It complements the ongoing work of its Accra galleries, where existing programming continues as usual. Further exhibitions include artists Tiffany Alfonseca, Serge Attukwei Clottey and Gideon Appah.